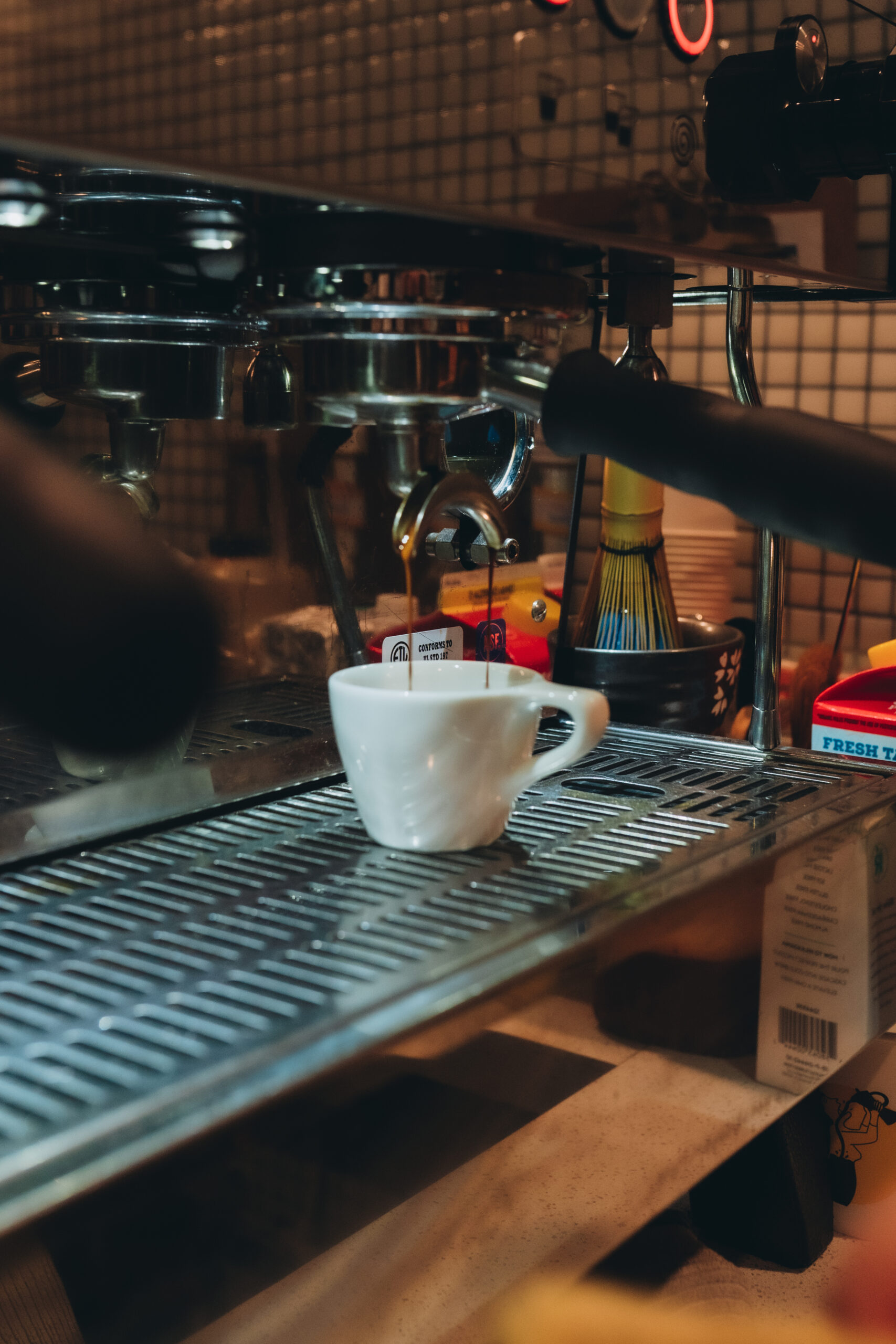 The espresso: A story

Today, we felt original and thought about talking about something that every coffee shop loves and can’t shut up about. The infamous espresso.

At ITSI we consider espresso as the root of it all, the purest form of coffee, the use and abuse of the bean world, the pick me up and take me through the day drink. We just love it.

We won’t serve you too many espresso shots; that’s not good for anyone. But the ones we do serve you are made with love, care, and the most incredible machine that is our obsession, «La Marzocco».

Which, if you must know, is a high-end coffee machine invented in Italy a long time ago.

It continues to be one of the best espresso machines to ever exist. Did we say we have it? Because we do.

But let’s talk about the espresso, the behind-the-scenes.

How is it made?

Espresso is made by forcing a small amount of nearly boiling water under pressure through finely-ground coffee beans.

Espresso has more caffeine per unit volume than most other types of coffee.

So it is served in smaller sizes to prevent people from having unpleasant experiences, like not sleeping for a whole day, shaking, and making impulsive decisions.

For coffee drinkers, espresso is coffee in its purest form. It is literally the «squeezed» bean.

Espresso is the first instant coffee ever made. Before it, making coffee could take up to 5 minutes. Can you imagine that?

We need to make it clear that espresso is not a bean or a roasting process. It is a method of preparation.

So this means that to make a great espresso, the chemistry has to be flawless. Precision, consistency, and balance are the 3 requirements for brewing excellent espresso.

Espresso can only be made with a machine. We can’t possibly pressurize water by ourselves, so we could say that it was actually the technology that made the drink possible.

We are in the 19th century, and coffee is booming. It is a huge business in Europe, and everyone loves it.

The downside of drinking coffee? It takes ages to make a cup; people have to wait precious time for their brew.

So, of course, inventors tried to juice the opportunity and develop a machine that would reduce the waiting time and make everyone happy and caffeinated.

The first thing they thought about was to use steam machines to reduce the time of the brewing.

It seems like the first patent was from Angelo Moriondo from Turin, Italy, in 1884.

The machine consisted of:

But Moriondo never marketed his idea. There are no pictures of the machine, so it got lost in translation, and someone else had to finish the job.

The invention of the espresso

The espresso was invented in Italy, Venice, to be more specific. Luigi Bezerra created it in the early 20th century.

He owned a manufacturing business, and it just didn’t let him sleep at night that so much time was being wasted brewing coffee.

He invented the single-shot espresso while trying to find out how to brew coffee directly into the cup.

He improved moriondo’s machine by introducing a portafilter, multiple brew heads, and a large boiler with built-in burner chambers filled with water.

It was heated until it pushed water and steam through ground coffee. The ideal temperature was 195°F. And that’s how Luigi made the espresso.

He named the machine «Fast coffee machine.» He called the brew the same way, «espresso,» which translates to fast.

He was just an original and practical guy who got things done.

What was the issue? Well, inconsistency. The machine was heated over an open flame, so the pressure was hard to control.

On the other hand, he didn’t know how to market the machine, so he had no choice but to partner up.

That’s when Desiderio Pavoni comes into the picture.

After Pavoni bought Bezerra’s patents in 1903, he improved the machine.

This meant that the barista wouldn’t suffer from a 3rd-degree burn from the pressure release. Long story short, baristas loved him.

Pavoni and Bezerra worked a lot in the machine, and in 1906 they presented it at the Milan fair.

Unfortunately, Bezerra fell into Oblivion after that, and Pavoni continued to market the «espresso.»

The machine was named the «Ideale» it was said to produce 1,000 coffees per hour.

What was wrong with it? It relied exclusively on steam, which left the coffee with a burnt or bitter taste, and there was not enough pressure to make it as strong as they do it now.

Pavoni dominated the market for more than a decade, but it never really got out of Italy.

He had competition, Pierre Arduino was determined to find a method that didn’t depend on steam only.

But he failed and found out that his marketing skills were better. Hence, he builds a marketing campaign around espresso and a poster of the machine.

He was able to export machines out of Milan and spreading the espresso across the rest of Europe.

Now we’re in 1938, and the espresso we drink today was already in the market.

Achille Gaggia created a machine that could increase the steam pressure even more than the machines before. It went from 1.5 – 2 atmospheres to 8-10 atmospheres.

This was achieved by using a spring piston lever to increase the pressure of the water in the boiler.

This had to be done by the barista; they would need to pull down the spring-piston, and then the machine would pour the espresso.

This eliminated the need for massive boilers and created a standard for an espresso’s size. This is because the cylinder on lever groups could only hold an ounce of water.

This new espresso would not taste burnt; the bitter taste of the previous machines was solved.

Gaggia continued to build machines through WWII and then created a company.

With this new machine, new jargon was born. When baristas used the levers, it was called «pulling a shot.»

«crema» became a thing, the foam floating over the coffee that screams espresso was a sign of a high-quality brew.

In 1961 Faema company makes a machine based on an electric pump to pressurize the water.

The fresh water goes through a tube heated with a boiler and then goes through the coffee. This was innovative because the water didn’t have to be in the boiler for a long time, which caused it to be stale.

This machine was called the Faema E61. It was invented by Ernesto Valente.

This machine has been improved through the years, and it is probably the closest to the machines we have today.

But with the development of the machine also came the recognition of the baristas.

Some say that a good espresso depends on the four M’s::

It is widely known that you could have the best machine and beans, but the barista can make or break the espresso.

Like we said at the beginning, espresso is one of the reasons ITSI was born.

Looking for the perfect coffee was one of the inspirations behind the coffee shop, and it still is.

ITSI’s owners are actually baristas, so you can imagine how passionate they are about coffee and that they genuinely care about the coffee ITSI has to offer.

To us, coffee it’s not just a pick-me-up or a break; it is a whole world of flavors, notes, and blends.

We believe coffee can reunite people, can cheer you up, and can warm your heart.

Coffee is also a source of jobs and opportunities. It supports families and communities.

At ITSI we put coffee in the center and pair it with art, healthy food, music, and books to bring out its best qualities.

We think about it as an experience. You can come with friends, family, or to work and just enjoy yourself while drinking a cup of your favorite coffee.

Let’s have a cafecito!

This is an invitation to come to I Think She Is and try our different coffees and dishes.

You can browse through our art studio and eye the fantastic books.

Come to work and stay the whole day, feel at home.

You can check out our menu right here.

And if you can’t come right now, you can always order online.

Food is our common ground, a universal experience.

Welcome to Gaspard, an online haven for true coffee lovers.